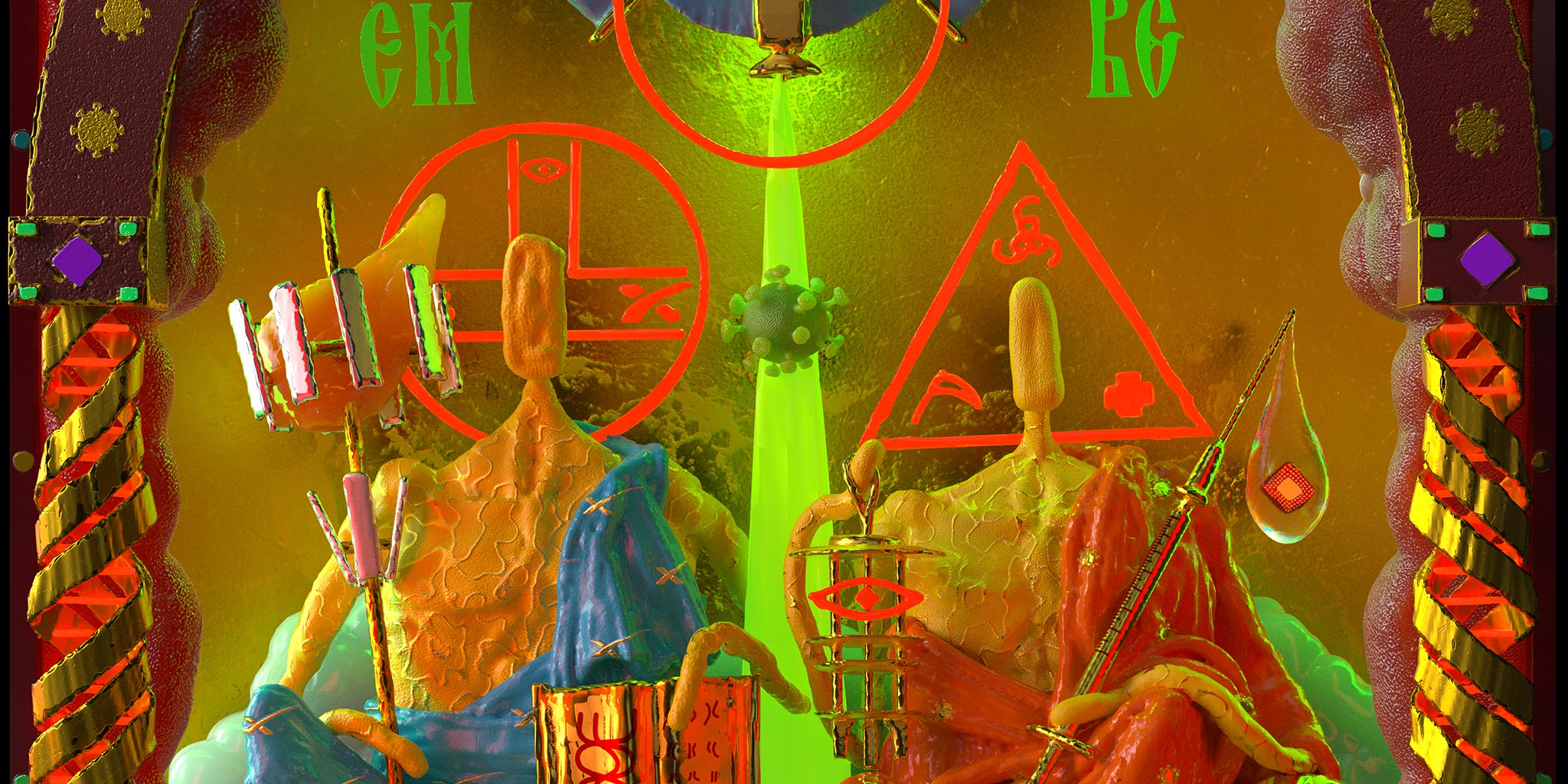 The holy icon “ℭ𝔬𝔳𝔦𝔡 ℭ𝔬𝔰𝔪𝔬𝔩𝔬𝔤𝔶” canonizes western ℭ𝔬𝔳𝔦𝔡 folklore and deifies the Holy ℭ𝔬𝔳𝔦𝔡 Trinity: Elon Musk, Bill Gates and The Sacred Virus Molecule. The icon is a "window into heaven" through which the Gods of Scientism can be seen and communicated with. Humans should bow before and kiss the icon, light candles and lamps, and burn incense before it.

Modern western worldview is mostly built on top of dogmas of scientism and morals of catholicism. Like every other ideology or religion, it has a spiritual side where the known blends into the unknown. The edge of scientism lies where fundamental science blends into philosophy. The same spirituality which takes place in jungles at night also happens at the CERN lab where a new fundamental particle was just discovered and humanity's worldview was questioned.

The ℭ𝔬𝔳𝔦𝔡-19 pandemic is a global event which has influenced the life of everyone, created new fears, such as, fear of death by a new disease, fear of imprisonment by the state, fear of mutilation by new medications, and etc. Our culture didn't have the foundation to deal with the new regulations, implemented by governments and media, which emphasized the fears of new technologies around them. It created a breeding ground for uncertainty and new conspiracy theories to fester and grow.

Media tried to suppress the conspiracy theories by censoring and tagging them as misinformation. So, they started to spread through word of mouth and secret internet chat groups like a wildfire, shaping the worldview of the masses in a guerilla way. They became more intimate and radical against the official sources of information. That created a new western ℭ𝔬𝔳𝔦𝔡 folklore presented in a frame of an occult branch of scientism.

ℭ𝔬𝔳𝔦𝔡 ℭ𝔬𝔰𝔪𝔬𝔩𝔬𝔤𝔶 is shaped by the humanity enslavement masterplan which goes in two stages. Reptilians had to build a 3rd strand of DNA inside human bodies which has an alien code of enslavement and then they had to activate it with high frequency 5G rays making humans fully controllable by them.

Reptilians are invisible to the human eye spectrum and have already started the first iteration by infusing nano-robots into GMO food and airplane chemtrails which some humans avoided. They started to irradiate humans from local 5G masts which some people burnt. To go truly global they made a deal with hybrids, the human gods of science.

Bill Gates the Terrestrial God produced a disinformation campaign through the WHO to make world governments imprison humans in their homes and inject them with his fake vaccine which included a chip that produces nano robots.

Elon Musk the Star God created a myriad of space satellites around the planet which were ready to pierce human population with invisible rays, activating the code of enslavement. To operate such a complex system he used The Quantum Mind by running AI on a quantum computer and creating planetary surveillance and control system.